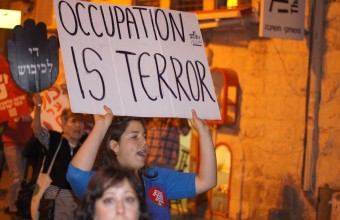 A range of organizations, Saturday, held a march in Jerusalem to call an end to 48 years of the 1967 occupation.

Among the organizers was the Coalition of Women for Peace.

‘We do this every year. It is important as we are facing a lot of house demolitions, violence and racism towards Palestinians here in Jerusalem.’

The group of demonstrators, mostly Israeli , marched from Zion Square to New Gate. Among them were Neta and Elad, two students from Jerusalem who joined the march because they have had enough of the ongoing discrimination and violence towards Palestinians in the city.

Arab Member of Knesset for Haddash, Ayman Odeh, was among the speakers in front of New Gate. He said:

Video by the Alternative Information Center.

‘You cannot find one Palestinian family who hasn’t been subjected to violence. Not one family, who hasn’t missed their imprisoned loved ones. Occupation is brutal, even to its conquerors. I am asking the fathers of the soldiers to think about their sons and daughters. Think of how they might enter the bedroom of a little boy tonight and arrest him just for being a Palestinian.’

The crowd was heard to yell: ‘Settlers and soldiers, get out of Palestine!’

The demonstration ended around 10 pm. 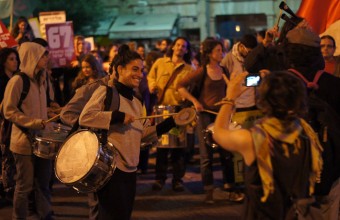