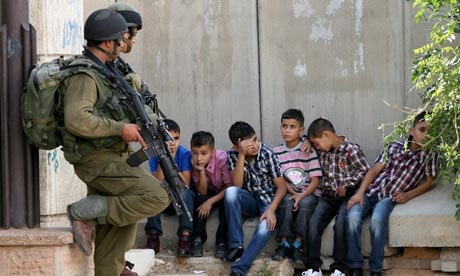 Palestinian Authority lawyer Hiba Masalha reported that young Palestinian detainees are being ‘terrified, threatened, and blackmailed’ by Israeli authorities while detained.There are currently 68 Palestinian teenagers being held in Section 3 of Megeddo prison, where Masalha visited recently, and most of the detainees were arrested from an orphanage in Tulkarem in the Northern West Bank.

17-year-old Mahir Hussein, from Qalqiliya in the northern West Bank, told Masalha that Israeli soldiers had fired gunshots into the air to threaten him and two other teenagers when they were detained. The soldiers threatened to kill him and then beat him violently.

Hussein was left bleeding with his hands and feet cuffed for 6 hours before being moved to a hospital in an Israeli military base where he got 24 stitches to seal the gaping wound in his head.

He was transferred to al-Jalama interrogation center where he was beaten and mostly confined to a wooden chair with his hands and feet cuffed for a period of 20 days.

There have been numerous reports of ‘widespread and systematic’ abuse of Palestinian detainees by Israeli forces, including reports by the United Nations and Defense for Children. The Defense for Children report stated that 93 percent of children detained by Israeli forces were denied access to legal counsel, and many endured prolonged periods of solitary confinement for interrogation purposes, which is considered torture under international law.