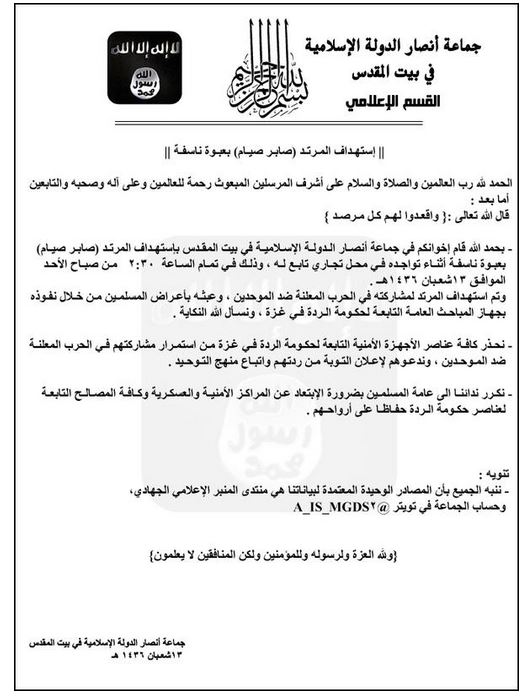 A group claiming allegiance with ISIS issued a statement, Sunday, claiming responsibility for assassinating a senior Hamas commander in the Gaza Strip, by detonating his store in Khan Younis.The group, calling itself Supporters of the Islamic State in Beit al-Maqdis, said it assassinated Saber Siam for what it claimed, “participating in the heretical war against the Mujahidin,’ and called on Hamas to “end its war on religion in Gaza, or face the consequences.”

It published a statement on its Twitter account saying it killed Siam approximately at 2:30 at dawn Sunday, by detonating his store, in Khan Younis in the southern part of the coastal region, for “participating in the war on the Mujahidin.”

The group also warned the Palestinians in the Gaza Strip to stay away from government-run offices and facilities, and all Hamas-run security or military centers, in the coastal region. Hamas officials and Hamas-run websites did not comment on the attack.

Earlier the month, the group fired shells into a training center for the Al-Qassam Brigades, the armed wing of Hamas in Khan Younis, Agence France Presse said.

The attack is believed to be related to an alleged attack by Hamas on a mosque, reportedly “frequented by ISIS supporters plotting against the government,” in Deir al-Balah.

The group is also responsible for numerous attacks against the Egyptian army, including recent bombings targeting army posts close to the border with Gaza.