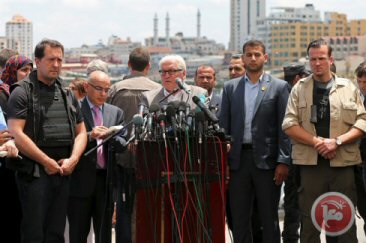 The German foreign minister, on Monday, called on Israel to lift the blockade of Gaza in return for Palestinian security reassurances during a visit to the beleaguered coastal enclave.Frank-Walter Steinmeier, heading a delegation of 60 German officials, arrived in the region on Saturday to hold talks with top Palestinian and Israeli officials.

During Monday’s visit to Gaza he said the enclave was a ‘powder keg’ at risk of exploding, and called for efforts to quicken reconstruction.

‘I came out of all my discussions yesterday in Jerusalem and in Ramallah with the hope that all parties are mindful that here we are sitting on a powder keg here and that we must ensure that the fuse does not catch light,’ Steinmeier said at a press conference in Gaza City’s fishing port.

‘We shall only be able to decisively reduce the risks of a fresh escalation if we allow economic development in the Gaza Strip in addition to humanitarian aid and reconstruction,’ he said.

That would only be possible ‘with open borders’ — a reference to the Israeli blockade restricting movement of goods and people.

However, he added that it would only be possible if there was a halt to Palestinian rocket fire on southern Israel.

‘But none of this will succeed until it is certain that there will be no further rocket attacks from here, when it is no longer a launch pad,’ he said.

During his visit, Steinmeier toured a German-funded girls school in the beachfront Shati refugee camp in Gaza City.

But he did not meet any officials from Hamas, the de facto power in Gaza that is designated by the European Union as a ‘terrorist organisation’.

Palestinian officials in the liaison office told Ma’an News Agency that the Gazan population continues to suffer as ‘real’ reconstruction has not yet started.

Last year’s conflict claimed the lives of more than 2,200 Palestinians, most of them civilians, and 73 people on the Israeli side, most of them soldiers.

A World Bank report published in May said Gaza’s unemployment rate of 44 percent was ‘probably the highest in the world’ which, coupled with its soaring poverty levels, was ‘very troubling’.

Earlier this month, Germany announced a $41 million contribution to the UNRWA shelter assistance program in Gaza.

With a total contribution of $93 million to UNRWA programs in Gaza to date, Germany is currently the second largest supporter of the UNRWA response to the humanitarian crisis resulting from last summer’s devastating war between Israel and Hamas.

UNRWA director in Gaza, Robert Turner, praised the move by Germany saying: ‘More than eight months after the summer 2014 conflict ended, the situation in Gaza remains desperate and the people of Gaza urgently need other donors to follow the excellent example set by Germany.’