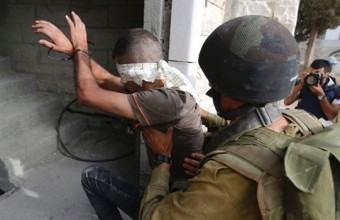 At least 15 Palestinians were abducted late Sunday night and Monday at dawn, by the Israeli army and police, in raids that targeted many cities across the West Bank and in East Jerusalem, according to local and security sources.WAFA Palestinian News & Info Agency reports that army forces broke into the village of Husan, west of Bethlehem, before dawn and arrested three Palestinians after raiding and searching their homes. The three were identified as Mohammad Jamal Zaoul, Mohammad Ali Hamamreh and Mohammad Shousheh.

Meanwhile, the army broke into Nablus, in northern West Bank, and nearby Balata refugee camp and kidnapped Mohammad Salah Hejazi, 31, and Ahmad Bitawi, 33. A resident of nearby Tell was also taken at a flying Israeli army checkpoint near the village last night. He was identified as Sameh Othman.

The military incursion into Jaba’ provoked confrontations with local residents, during which the army fired teargas canisters and stun grenades towards them, causing multiple cases of suffocation.

In the meantime, the army notified a resident of the village of Tinnik about their intent to demolish an artesian well that he owns, under the pretext it was constructed without an Israeli permit.

Meanwhile in Jerusalem, Israeli police stormed the neighborhood of Silwan and abducted five local residents after raiding their homes in separate raids. The five, who were identified as Khalil Odeh, Amer Abbasi, Mohammad Abbasi, Mohammad Jabari and Udai Khweis, were led to a nearby police interrogation center.

Earlier last night, Israeli soldiers at a flying checkpoint near Bethlehem physically assaulted a passenger, leaving bruises all over his body. He was identified as Ahmad Salah, 25, and was transferred to hospital for medical treatment.

Later on Monday, an army vehicle stormed a gas station in Jenin and arrested 25-year-old Tareq Abul-Haija who works at the site, witnesses reported.

Meanwhile, Israeli police took the wife of a Palestinian detainee into custody while she was visiting her son in the Israeli Eshel prison in Beersheba. She was identified as Rabia, the wife of prisoner Ismail Arrouj from Bethlehem.