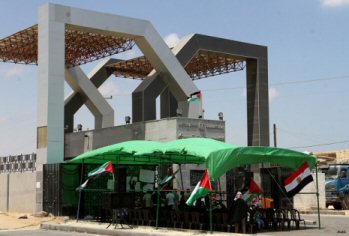 Gazans unable to travel due to Rafah crossing’s closure started, on Tuesday, an open-ended hunger strike, calling for Egyptians to open it.Days of Palestine reports that the hunger strikers set up a tent near the crossing and put up a number of posters including: “People stuck in Gaza call for Egyptian Authorities to open the Rafah crossing in both directions.”

Another poster read: “We call for the UN and all human rights organisations to facilitate the travel of Gaza’s patients… Gaza’s patients are awaiting death because of the closure of the crossing. We are humans… Where are President Abbas and the unity government?”

The hunger strikers said that they would continue their strike until the crossing is opened, calling for the Palestinian Authority and the Palestinian unity government to take action to make this happen.

Spokesman for the strikers, Majdi abu-Kareem, said that around 15,000 Palestinians need to travel urgently and they are “just waiting for the crossing to open”.

“The continuous closure of the crossing increases the suffering of the people of Gaza,” Abu-Kareem also said. “The closure makes the coastal enclave the biggest prison in the world.”