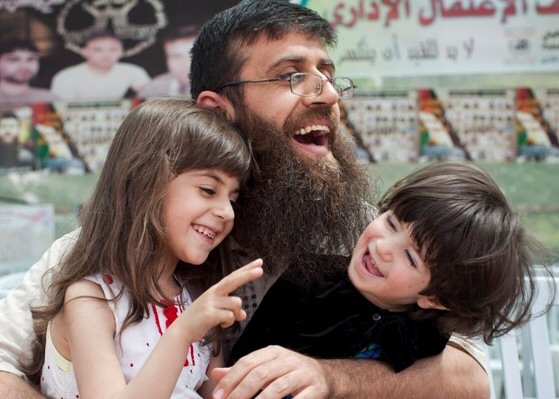 The family of Khader Adnan, leader in the Palestinian Islamic Jihad movement, who was rearrested and incarcerated in Israeli jails, has confirmed to media the physical weariness which has appeared on him as he enters the second month of hunger strike. According to Al Ray Palestinian Media Agency, the prisoner’s wife, Umm Abdel-Rahman, said to Safa, Wednesday, that “Adnan could no longer move and he is beginning to lose hair, in addition to other manifestations of fatigue cause concern.’ the prisoner’s wife,

She pointed out that ‘the Israeli Prison Service used ruse in dealing with him in order to break his strike, such as handing him a list of faulty instructions for the hunger striker.’

She is confident that Adnan has the ability to continue his strike, referring to his previous hunger strike which led to his release. She stressed that Adnan has a just cause which deserves his struggle.

Khader Adnan is a former Palestinian detainee of the Israeli state. Authorities had not laid any formal charges against him, but said he was arrested for ‘activities that threaten regional security’. He was released on 18 April, 2012, after being on hunger strike for 66 days. Adnan, 37 years old, was arrested for the 10th time on July 8, 2014. He has been on hunger strike since May 5 in protest of the prison authorities’ decision to renew his administrative detention for the third time in a row. Israel had initially referred Adnan to administrative detention for a period of six months. At the end of that period, his detention was renewed for another six months (which was later shortened to four months), followed by a third four-month extension.