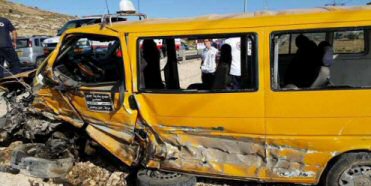 7 Palestinians and 4 Israeli settlers have been injured in a car accident Wednesday morning involving an Israeli car and a Palestinian car south of Nablus city, according to Israeli social media.Social media indicated, according to the PNN, that the accident happened near to A’lia settlement, south of Nablus, and resulted in 7 Palestinians sustaining minor injuries. They were taken, by Palestine Red Cross ambulances, to Ramallah hospital for treatment. 4 injured settlers were taken to Hadasa hospital in occupied Jerusalem and their conditions described as stable.

Photos taken by eye witnesses show that the Palestinian public transport vehicle and the private Israeli vehicle were both severly damaged. Eye witnesses also confirmed that the accident was due to heavy traffic on the road.

Although most main roads are shared by Palestinians and Israelis, many roads in the West Bank are for the exclusive use of Israelis, with Palestinian drivers banned from approximately 105 kilometers of West Bank roads, according to Israeli human rights organization B’Tselem. The separate road system for Palestinians is often unpaved and in some cases is little more than a dirt track, rather than a viable road.