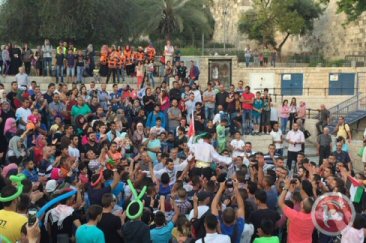 Palestinians, on Wednesday afternoon, protested the start of the Lights in Jerusalem festival, in the Damascus Gate area of the Old City, onlookers said. A Ma’an reporter said that activists organized the event in response to the Israeli ‘Judization festival,’ which starts on Wednesday and ends on Saturday, June 11.

Israeli forces surrounded the activists in the Palestinian event and tried to stop all cultural and sport activities they were holding by threatening them and confiscating the speakers they used.

Israeli forces also fired stun grenades and chased down participants including women and children in an attempt to clear out the area and allow the light festival to begin.