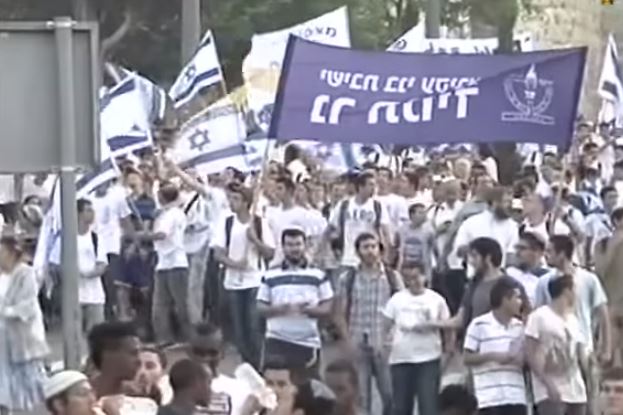 Israeli soldiers kidnapped, on Wednesday evening, at least three Palestinians, participating in procession against the provocative Israeli march, on the sidelines of the so-called “Jerusalem Lights Festival,” that was organized by several Israeli government facilities and settlers’ groups.The Palestinian News & Info Agency (WAFA) has reported that the soldiers fired concussion grenades at the Palestinians, and violently assaulted several young men, women and children, before kidnapping at least three.

Two of the kidnapped have been identified as the head of the Fateh Youth Group in Jerusalem Ahmad al-Ghoul, and Samer Abu ‘Aisha.

The Palestinians marched in the “Jerusalem Is Ours” possession carrying flags, and chanting slogans for the liberation of Palestine, and Jerusalem, while one protester managed to raise the Palestinian flag on the wall of Bab al-‘Amoud before the soldiers assaulted him, causing carious cuts and bruises.

The protesters also played the Palestinian national anthem and revolutionary songs, to counter the provocative Israeli procession in the occupied city.

Soldiers also fired gas bombs at the protesters causing scores to suffer the effects of tear gas inhalation, while many suffered cuts and bruises after being chased, and assaulted, by the army.

The soldiers allowed Israeli groups and settlement organizations to march provocatively in Jerusalem, as part of the Lights Festival, carrying dozens of Israeli flags and chanting provocative slogans, especially in the occupied Old Jerusalem.