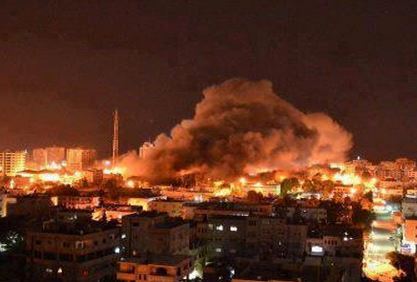 The Israeli Air Force carried out, on Thursday at dawn, several air strikes targeting a number of areas, and resistance camps, in different parts of the Gaza Strip, causing excessive property damage but no injuries. Israel claims the bombardment came in retaliation to shells fired from Gaza. Media sources said the Air Force fired two missiles into a site run by the al-Qassam Brigades of Hamas, near the al-Maqousi Towers, west of Gaza City.

The bombardment caused excessive damage to the site, in addition to nearby homes and property.

Another Israeli missile targeted a site southwest of Gaza city, also causing damage to the site, and several nearby homes.

Two more missiles were fired into a site located northwest of Khan Younis city, in the southern part of the coastal region.

The Israeli Army claimed that two shells, allegedly fired from Gaza, landed in open areas in the Shear HaNagev Regional Council of Settlements, and in open areas near Asqalan (Ashkelon.)

The army added it managed to determine that three missiles were fired towards Asqalan, two towards Shear HaNegev, and that one of the missiles was fired from an area close to the shore, west of Gaza, while another missile was fired from the site of the former Netzarim settlement, south of Gaza.

Head of the Yisrael Beitenu extremist party Avigdor Lieberman demanded “ending the Hamas rule in Gaza,” in addition to accusing the government of Benjamin Netanyahu of “proving to be a failure.”

Member of Knesset, former head of the Eshkol Regional Council of Settlements, Haim Yellin of the Yesh Atid Party (There Is Future) called for a “fierce retaliation,” and said that the reconstruction of Gaza must be preconditioned with disarming all armed groups in Gaza.

Late on Wednesday at night, Israeli sources said two shells were fired from the Gaza Strip into southern Israel causing no damage or injuries.

Israeli officials said, although the shells were fired by groups that are not affiliated with Hamas, including groups that are hostile to the movement, “Hamas is responsible for any escalation in the coastal region.”

Israeli Defense Minister Moshe Ya’alon also held Hamas accountable for the escalation, and said the army bombarded several targets in Gaza,” and added that “although the people behind the attacks are members of international Jihadist groups, we hold Hamas fully responsible.”

He stated that Tel Aviv will not “tolerate attempts to harm civilians in Israel,” and “will not allow the return of a reality where rockets trickle on Israel.”