Army Kidnaps 12 In The West Bank, Demolishes Wells And A Wall, Near Hebron 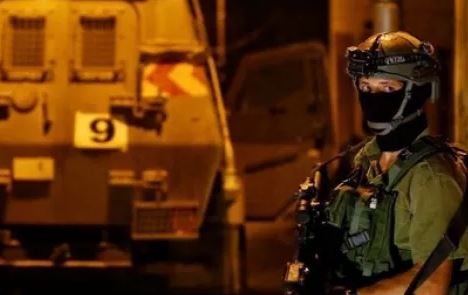 Israeli soldiers invaded, on Thursday at dawn, several Palestinian communities in different parts of the occupied West Bank and Jerusalem, stormed and searched dozens of homes and kidnapped at least twelve Palestinians. Soldiers also demolished wells and a wall in a town, near Hebron.Media sources in occupied Jerusalem said the soldiers invaded homes in the Schools Street, in Jabal al-Mokabber neighborhood, and kidnapped two Palestinians identified as Ahmad ‘Aziz “Oweisat, 23, and ‘Ata Mohammad ‘Oweisat, 43.

In addition, soldiers invaded several homes in Silwad town, east of the central West Bank city of Ramallah, and kidnapped Ali Bassem Hamed, 19, and Tareq Naim Hamed, 21. They also searched homes in the town, after surrounding them.

Silwad has been subject to frequent invasions, and arrests that led to the abduction of 18 Palestinians in less than two months, while dozens of residents, including more than ten children, were detained for several hours.

Also in Ramallah, soldiers invaded Deir Ghassana village, northwest of the city, stormed and searched several homes, and handed one resident a military order for interrogation in the ‘Ofer military base.

Soldiers also kidnapped three Palestinians from the southern West Bank city of Hebron, and took them to the Etzion military base.

The three have been identified as Nasr Hussein Abu Hadeed, Mohammad Saleh Mahmoud Abu Turki and his brother Amjad.

Another Palestinian, a college student identified as Yousef Sweity, was kidnapped from his home in Beit ‘Awwa town, west of Hebron.

Head of the Surif Local Council Mohammad Lafi said the the demolished wells are vital for agriculture, and that the soldiers also bulldozed dozens of Dunams of farmlands belonging to Ghneimat family, in Sha’ab Seif and Qornet Hadid, west of the town.

On Wednesday at night, soldiers kidnapped a child, identified as Ghaleb Hamed, 15, after stopping him on a roadblock installed on the western entrance of the Silwad. Hamed also holds a U.S. citizenship. http://www.imemc.org/article/71817