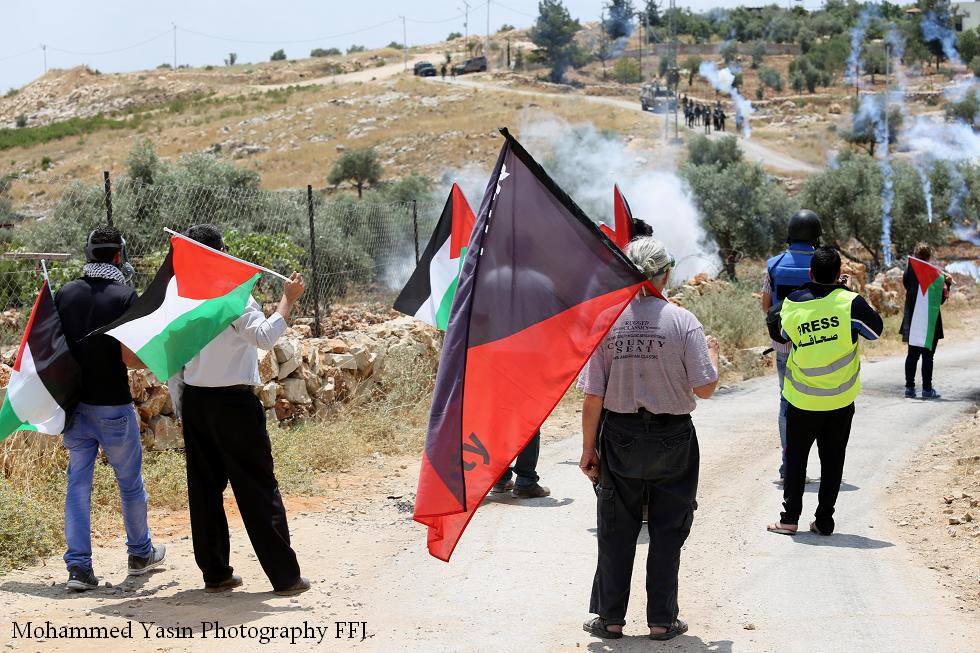 As dozens of Palestinians, accompanied by Israeli and international peace activists, marched Friday, marking the 48th anniversary of the Palestinian Naksa, Israeli soldiers resorted to the excessive use of force wounding two, while scores suffered the effects of tear gas inhalation.The Popular Committee against the Wall and Settlements in Bil’in said dozens of soldiers were deployed, since early morning hours, surrounding the village, in an attempt to prevent the protesters from holding the weekly procession.

The locals, accompanied by Israeli and international supporters, marched from the center of the village, carrying Palestinian flags while chanting slogans calling for national unity, the release of all detainees and the liberation of Palestine.

This week, the protest commemorated the 48th anniversary of the Palestinian Naksa, when Israel captured the West Bank, the Gaza Strip and East Jerusalem.

The protesters affirmed the Palestinian national rights, including the Right of Return of all refugees displaced and depopulated by the occupying Israeli forces.

The Committee said that a French delegation visited the village, and attended the weekly protest to witness the ongoing Israeli violations.

The delegation listened, before the protest, to a detailed presentation by Popular Committee member, Abdullah Abu Rahma, highlighting the achievements of the village over the last ten years since it began its ongoing protests against the illegal Israeli wall and settlements.