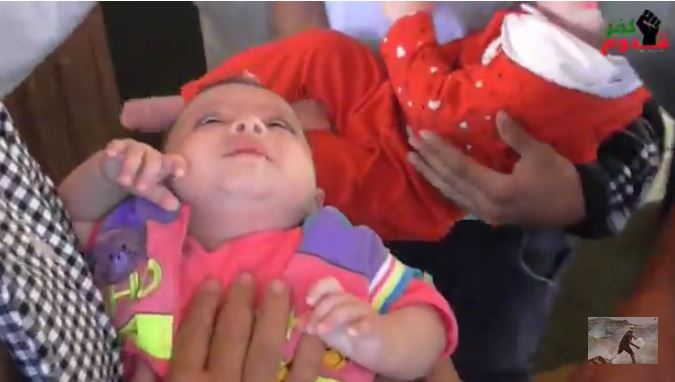 Dozens of Israeli soldiers invaded, on Friday, Kufur Qaddoum village, near the northern West Bank city of Qalqilia, and attacked the weekly protest, which led to clashes; the soldiers fired dozens of gas bombs, causing six siblings, between the ages of six months and five years, to suffer severe effects of tear gas inhalation; one Palestinian was shot with a live round.This week, the villagers were marching in commemoration of the Palestinian Naksa of 1967, when Israel occupied the rest of Palestine (the West Bank, the Gaza Strip and East Jerusalem,) and demanding Israel to reopen the main village road that it shut down 13 years ago.

Morad Eshteiwy, coordinator of the Popular Committee against the Wall and Settlements in Kufur Qaddoum, said dozens of soldiers, accompanied by an armored military bulldozer, invaded the village, and advanced towards its mosque while firing a barrage of gas bombs, live rounds and rubber-coated metal bullets.

Eshteiwy added that the soldiers fired dozens of gas bombs directly at the homes of the residents, in addition to firing rounds of live ammunition and rubber-coated metal bullets, and sprayed the protesters with wastewater mixed with chemicals.

Some of the bombs struck a family home, causing six children, ages six months to five years, and their parents, to suffer severe effects of gas inhalation, while some children fainted, before residents rushed to the family home to rescue them.

The invasion, and the targeting of homes, led to clashes between the soldiers and dozens of local youth who hurled stones and empty bottles on them.

Medical sources said one Palestinian, 45 years of age, was shot in the leg, with a live round fired by the invading soldiers.