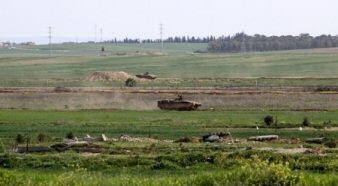 A number of Israeli military units, including bulldozers, today, infiltrated east of the neighborhood Shuja’eyya, east of Gaza City, in a leveling operation on agricultural border lands.Eyewitnesses reported, according to the PNN, that 4 military bulldozers entered the eastern lands in the Shuja’eyya neighborhood.

Gazan farmers have been repeatedly targeted on their lands by the Israeli occupation.

On Wednesday morning, one farmer was injured by indiscriminate firing from Israeli forces on the border of Khuza’a town east of Khan Younis in the southern Gaza Strip.