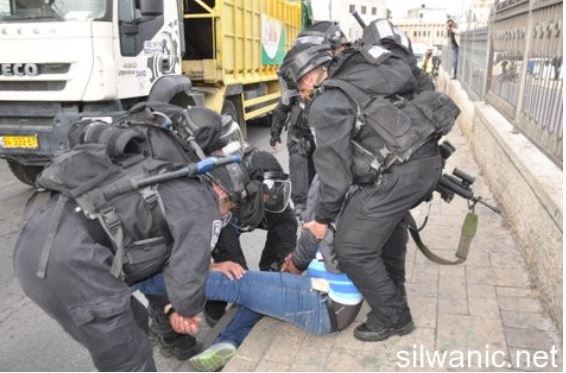 Israeli soldiers invaded, late on Monday at night and on Tuesday at dawn, several Palestinian villages and towns in different parts of the occupied West Bank, violently searched and ransacked homes, and kidnapped twelve Palestinians, including four in occupied Jerusalem.The Wadi Hilweh Information Center in Silwan (Silwanic), in occupied Jerusalem, said the soldiers stormed and searched several Palestinian homes in the town, and in the Old City, and kidnapped four Palestinians.

The kidnapped have been identified as Basel Shweiki, 20, Nassim Sheiki, 27, and Morad Sheiki, 20, from the al-‘Abbasiyya neighborhood in Silwan, in addition to a young man, identified as Walid Feerawi, who was kidnapped from his home in Jerusalem’s Old City.

Media sources in Nablus, in the northern part of the occupied West Bank, said the soldiers kidnapped three Palestinians from Einabous village, south of Nablus, as they were trying to enter Israel for work.

The army said the Palestinians, Moath Mazen Hamad, 28. ‘Ayesh ‘Awad ‘Allan, 52, and Anas Abdu Hussein, 40, were moved to the Huwwara military base, and will be sent to court Wednesday.

In addition, soldiers invaded ‘Allar town, north of the northern West Bank city of Tulkarem, and kidnapped Malek Abdul-Qader Ja’ari, after breaking into his home and violently searching it, causing excessive property damage.

Another Palestinian, identified as ‘Omar al-Hour, was kidnapped from his home in Surif town, north of Hebron.

The army also installed several roadblocks on Hebron’s northern entrances, and the main entrance of Sa’ir town, north of Hebron, before stopping and searching dozens of cars and inspected the ID cards of the passengers.

Head of the Teqoua’ Local Council, Taiseer Abu Mfarreh, said some of the searched homes belonging to brothers of detainee Riyadh al-‘Amour, and that the soldiers photographed their homes while searching them.

Furthermore, soldiers invaded homes in Qabatia town, and Msalia village, near the northern West Bank city of Jenin, searched them, and used their rooftops as monitoring towers.