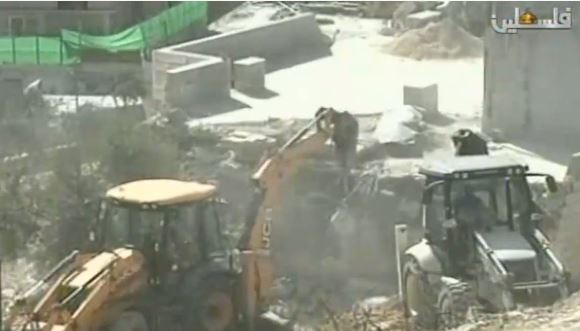 Israel alleges the structures were built without construction permits.

Abu Rabah added that the families filed construction permits to the City Council more than four years ago, and paid at least 50.000 NIS to obtain all needed permits and documents.

He added that the al-Matari workshop was first demolished five months ago, and that the City Council “practically froze all construction applications, civil and for industrial purposes, more than thirty years ago.”

The al-Khalayla neighborhood has been under strict Israeli measures for more than ten years, while the army prevents any Palestinian, who is not a resident of the neighborhood, from entering without a permit.

“Add to that the daily suffering and humiliation the children are subjected to on the al-Jeeb roadblock,” he added, “The soldiers stop and search them every single school day, causing delays. The army inspects even our food products; everything requires prior coordination and permission from the Israeli Authorities.”

He also said the 900 Palestinians live in the neighborhood, while Israel is threatening to demolish several homes, as the neighborhood is surrounded by illegal Israeli colonies that are constantly expanding, while the residents are not even allowed to live on their own lands, and build homes.