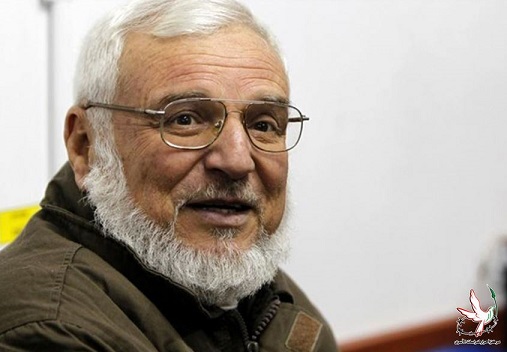 Israel released, on Tuesday evening, the elected head of the Palestinian Legislative Council (PLC), Dr. Aziz Dweik, after holding him captive for twelve months.The Change and Reform Bloc of Hamas confirmed the release of Dr. Dweik, and said “his freedom came as a result of his determination and steadfastness.”

Dr. Dweik was taken prisoner from his home, in the southern West Bank city of Hebron, in mid June 2014, and was recently sentenced to twelve months, and a 6000 New Israeli Shekels fine.

His arrest came as the soldiers also kidnapped several Hamas legislators, representatives and officials in different parts of the occupied West Bank.

Dr. Dweik appeared before 14 court hearings, facing various charges, including what Israel called “incitement,” during a speech he gave a few years ago.

He was repeatedly imprisoned by Israel, spending a total of four years behind bars, largely held under Administrative Detention, without charges or trial.

His release brings the number of detained legislators to 21, in addition to two government ministers.

The Ahrar Center for Detainees’ Studies and Human Rights recently reported that the army kidnapped 352 Palestinians, including at least 14 women and 50 children, in different parts of the occupied territories in May, and that the majority of the arrests took place in Jerusalem (115) followed by Hebron (78) and Ramallah (58).