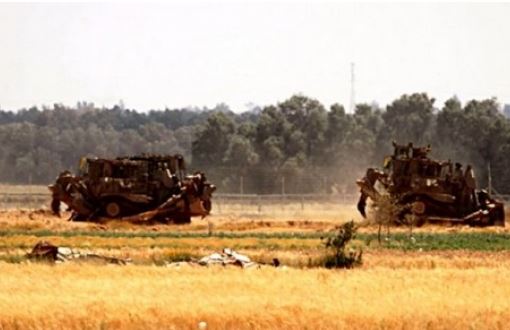 Several armored Israeli military vehicles, and bulldozers, conducted, on Wednesday morning, a limited invasion into Palestinian agricultural lands, east of the al-Qarara town, northeast of Khan Younis, in the southern part of the Gaza Strip.Eyewitnesses said three armored bulldozers, and four tanks, left the Kissufim military base, across the border fence, and advanced approximately 200 meters into the farmlands.

Military drones were also flying overhead, while the invading soldiers fired dozens of rounds of live ammunition to force the Palestinians out of their lands.

In related news, an Israeli military bulldozer fell into a ditch while bulldozing lands, east of Khuza’a town, east of Khan Younis. The army called for backup to retrieve its bulldozer.

Soldiers conduct daily violations against the farmers and their lands, close to the border fence, in addition to frequent assaults against Gaza fishers in Palestinian territorial waters.