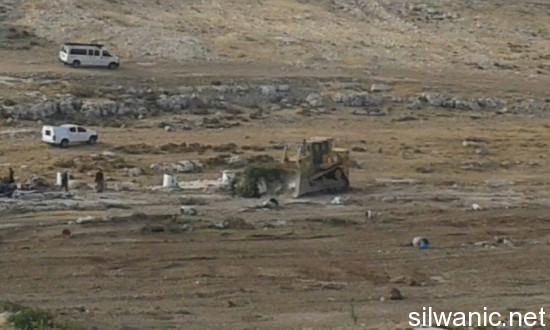 Mohammad Abu al-Hummus of the Follow-up Committee in the al-‘Isawiyya town, said Israeli bulldozers of the City Council and the “Environment Protection Department,” also demolished a 60 square meter building that includes a kitchen, bathroom, and an indoor planting room, in addition to their water well and the well’s surrounding wall.

Abu al-Hummus said the soldiers did not even show the residents any official demolition order, and prevented them from entering their property.

Resident Adnan Darwish said the family has all official deeds, approved by the Israeli court, and said the destruction even violates Israeli law, as well as international law.

Hani al-’Eesawy of the Land Defense Committee in the al-‘Isawiyya town, said the attack violated a ruling issues last year, ordering a halt on the construction of the “Talmudic Garden,” located on more than 740 Dunams (184 acres) of lands owned by Palestinians from al-‘Isawiyya and at-Tour villages.

He added that the Palestinian landowners have been involved in a lengthy legal battle in Israeli courts since Israel announced its plan to build the “garden”, in 2007.

Al-‘Eesawy also said that uprooting the lands, and destroying the Palestinian property, exposed the true nature of the Israeli plan to build a new settlement outpost on Palestinian lands, in order to prevent any Palestinian geographical contiguity.

Raed Abu Ryala of the Follow-Up Committee said the destroyed farm is located within the plot of land Israel has been trying to illegal confiscate to build the garden.

He added that, in September of 2014, the Israeli Regional Construction and Planning Committee ruled that construction could not begin on the “Talmudic Garden” project in at-Tour and al-‘Isawiyya, but could begin construction in other places outside of the properties in question.