Two Children Kidnapped In Jerusalem, One Teen In Nablus 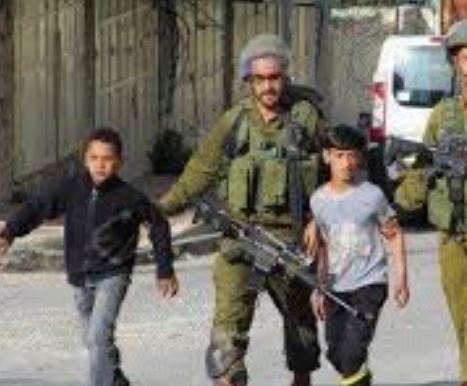 Israeli soldiers kidnapped, Wednesday, two Palestinian children in the al-‘Isawiyya town, in occupied East Jerusalem, and an 18-year-old in the northern West Bank district of Nablus. Army also demolished a residential tent near Hebron.Several military vehicles invaded the ‘Askar refugee camp, east of Nablus city, before the soldiers kidnapped Ahmad Mohammad Da’das, 18 years of age, after violently breaking into his family home, and searching it.

The soldiers also tried to smash the main gate of the Salahiyya Secondary School for Boys, in an attempt to invade and search it.

In addition, the Wadi Hilweh Information Center in Silwan town (Silwanic), in occupied East Jerusalem, has reported that the soldiers broke into two homes in the town, and kidnapped two children, identified as Tareq Fares al-‘Eesawy, 13 years of age, and Ahmad Jamal Mahmoud.

Silwanic added that the two children were moved to an interrogation facility in the city.

In related news, soldiers demolished a residential tent in the Esteir area, southeast of Yatta town, in the southern West Bank district of Hebron.

Coordinator of the Popular Committee against the Wall and Settlements Rateb Jabour said Israeli army bulldozers demolished the residential tent, close to the Bet Yatir illegal colony, after surrounding the area.

The tent belongs to Khalil Abu Qbeita and his family; the soldiers claimed the destruction was for “security considerations.”

Jabour said Israel has been trying to displace the Palestinians, living in the eastern part of Yatta, in order to implement a settlement construction plan on lands belonging to 15 Palestinian communities in the area.