Half of Gazans Polled Considering Emigration 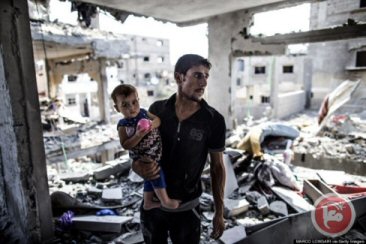 Half of Gazans say they are considering emigration from the Gaza Strip, according to the Palestinian Center for Policy and Survey Research.AFP reports that the 50 percent of those polled in Gaza thinking of leaving the coastal enclave is the highest percentage ever recorded, amidst decreasing satisfaction of achievements attained by Hamas last summer’s war.

Increasing frustration comes the IMF reported last month that reconstruction since the most recent war between Israel and Hamas has been significantly lower than expected, while the World Bank reported that the strip was facing a ‘dangerous fiscal crisis’.

Unemployment in Gaza increased in 2014 ‘to reach 44 percent — probably the highest in the world,’ the World Bank reported, with the poverty rate in the occupied Palestinian territory reaching 39 percent, despite the fact that nearly four of every five Gazans receive ‘some aid’.

‘Gaza’s unemployment and poverty figures are very troubling and the economic outlook is worrying,’ the World Bank quoted Palestinian territories director Steen Lau Jorgensen as saying in a statement.

The UN has repeatedly warned of further conflict in the area if the reconstruction process continues at such slow pace, emphasizing that Gaza’s humanitarian crisis is worsened by Israel’s eight-year blockade on the Strip.

In the West Bank, however, the level of satisfaction with the performance of Abbas rose to 44 percent, compared to 40 percent three months prior.

Elections have not been held since 2006 largely due to ongoing political divisions between Fateh and Hamas.