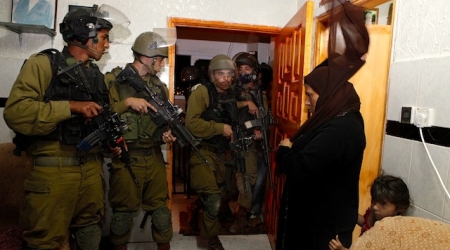 Israeli forces raided, at dawn on Tuesday, the house of Palestinian political prisoner Khader Sarakji, 39, in the city of northern occupied West Bank city of Nablus, and stole cash money and a car.According to Al Ray Palestinian Media Agency, local sources reported that the soldiers searched the house violently and tempered with its contents. They questioned Khader’s wife who affirmed that the soldiers stole a car belonging to the family, in addition to NIS 4,300 ($ roughly 1100 US).

Israeli forces arrested Sarkaji two years ago, and he is still awaiting trial.

The army also stormed the village of Madama, south of Nablus, and launched an inspection campaign to several houses.