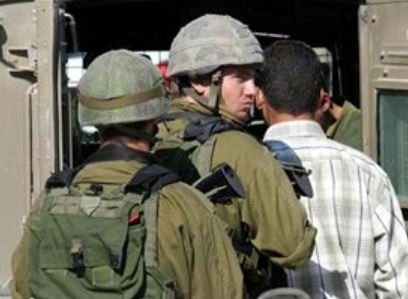 Israeli soldiers invaded, on Wednesday evening, Beit Ummar town, north of the southern West Bank city of Hebron, and kidnapped one Palestinian.Mohammad Ayyad Awad, spokesperson of the Popular Committee against the Wall and Settlements in Beit Ummar, said the soldiers stopped Ahmad Yasser Za’aqeeq, 24 years of age, as he was driving his car on the main entrance of the village.

Awad added that the army forced Za’aqeeq out of his car, cuffed and blindfolded him, and took him to an unknown destination.

Late on Wednesday at night, many Palestinians suffered the effects of teargas inhalation, during clashes with Israeli soldiers invading Kafrit village, southwest of the northern West Bank city of Jenin. http://www.imemc.org/article/71890

Earlier on Wednesday, soldiers kidnapped two Palestinian children in the al-‘Isawiyya town, in occupied East Jerusalem, and a teenager in the ‘Askar refugee camp, in the northern West Bank city of Nablus. http://www.imemc.org/article/71882