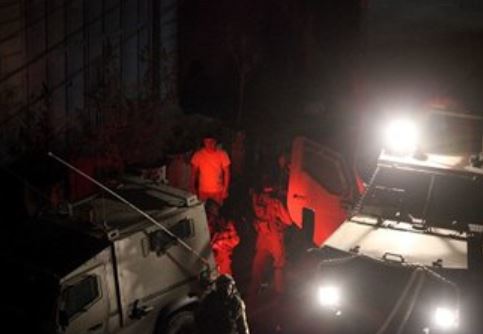 The two have been identified as Salah Ibrahim Za’aqeeq, 38, and Mohammad Saleh Ahmad Za’aqeeq, 20.

Awad added that the soldiers took pictures of the interior and exterior of a number of homes after invading them, and detained the families while searching their properties.

Owners of two of the invaded homes have been identified as Jamal Khalil al-‘Allami, and Abdul-‘Aziz Mahmoud Abu ‘Ayyash.

In addition, soldiers invaded and searched several homes in the al-‘Isawiyya town, in occupied East Jerusalem, and kidnapped five teenagers.

In related news, a number of Israeli fanatics attacked, and violently beat, a young Palestinian man, identified as Shadi Abed-Rabbo, as he was working in West Jerusalem.

The man was moved to the Shaare Zedek Medical Center, suffering moderate injuries.

Clashes In Silwan After Soldiers Attempted To Kidnap A Child
http://www.imemc.org/article/71897