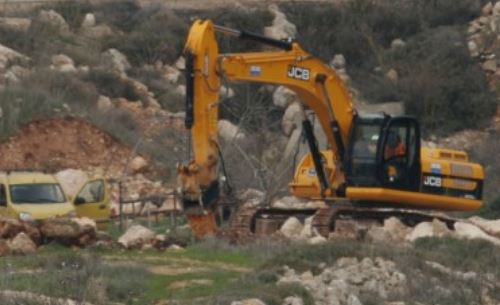 Several Israeli military vehicles, and armored bulldozers, invaded, Thursday, Palestinian agricultural lands in Wadi Fukin village, in the West Bank district of Bethlehem, and bulldozed around 17 Dunams of farmlands. The Palestinian Agricultural Relief Committee said the bulldozers started uprooting the Palestinian lands, after surrounding the area and declaring it a closed military zone.

The Committee added that the bulldozed and uprooted lands, are located between Beitar Illit and Tzur Hadassah illegal colonies. The owner has been identified as Sabri Rashad Manasra.

Head of the Wadi Fukin Village Council Ahmad Sukkar said Israel intends to use the lands, totaling 20 Dunams, to build a Trade and Industry Zone for the two settlements.

Israel is planning further constructions and expansion in the area, for the “Industrial Zone,” and the expansion of settlements, an issue that would lead to the illegal confiscation of hundreds of Dunams of Palestinian lands.