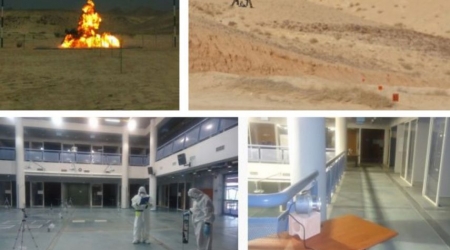 The administration of Dimona nuclear reactor has reportedly been conducting a number of experiments on radioactive bombs, in the Negev desert and also within closed reactor constructors, Haaretz recently unveiled.The newspaper stated that the goal of these experiments, which began in 2010 and ended last year, was to study the effects of such bombs on the environment. The bombs used in the projects weighed between half kg to 25 kg ; the project was called the ‘green field’.

These experiences proved the presence of high radiations rates, in addition to a few notable amounts of radiation distributed across the surrounding area.

Al Ray further reports that the Israeli occupation has always used internationally-banned weapons unabated. the cancer rate has sharply increased in the Gaza Strip in wake of three Israeli wars against the coastal enclave, the Palestinian Ministry of Health stated Thursday.

Officials of Al Shifa hospital stressed that the increasing number of cancer cases is due to the pollution caused by Israeli use of internationally-prohibited weapons.

In its previous offensives against Gaza, Israeli forces fired shells containing white phosphorus, which causes horrific burns when it comes into contact with skin. Under international law, phosphorus is allowed as a smokescreen to protect soldiers but treated as a chemical weapon when used against civilians.