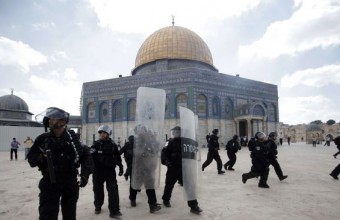 Tens of extremist Israeli settlers, again, stormed Al-Aqsa Mosque under heavy police protection, Thursday morning.The settlers broke into the mosque from Al-Maghareba Gate, while witnesses said that police assaulted two Palestinian children who happened to be near the gate when the settlers passed through.

Information Coordinator of Al-Quds, Al-Aqsa Affairs Centre Mahmoud abul-Ata said, according to Days of Palestine, that 32 extremist settlers broke into the mosque and conducted a religiously natured ‘tour’ around it.

“They performed mythical rituals in several areas,” he said. “Palestine worshipers sometimes undermine their desecration of the mosque but, this time, they were heavily protected by the Israeli special police.”

Abul-Ata confirmed the assault on the two children, noting that Palestinian children attend summer camps organised in the yards of the mosque.

“The police locked the children in a certain corner, keeping them without movement until after the settlers left the Mosque,” Abul-Ata said.

To be noted, more than ten Palestinian men and women who had been banned to enter into the mosque by Israeli authorities, were sitting at Al-Silsila Gate.