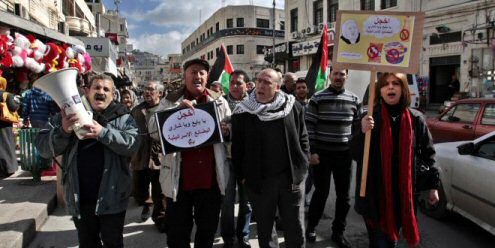 Israeli Channel 7, on Thursday, reported fears of the PA stepping up BDS activities against Israel before filing lawsuits in the International Criminal Court, in June, to hold it accountable for crimes in Gaza and the occupied West Bank. Walid Assaf, chairman of the Commission Against the Wall and Settlements, said through international media that the PA will have no choice but to intensify BDS against Israel on an international level, in order to stop settlement expansion.

Assaf assured that the negotiations will never happen unless Israel completely halts settlement activities in the occupied West Bank. He added that Palestinians will not return to negotiations in their old form, since Israel has never responded to any given demand, in addition to its continuing violations against Palestinian rights in Susya, Jerusalem, the Jordan Valley are and more attempts of displacements.

Channel 7 considered these potential acts a strategic threat to Israel that should not be taken for granted.

Israeli forces have razed 17 dunams of Wadi Fukin village, in the course of a single day.