EU to Label Products Made in Illegal Settlements 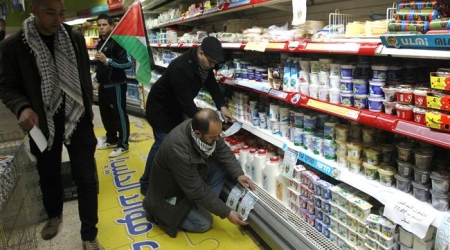 The European Union (EU) will soon begin to mark the products of Israeli settlements, according to the Associated Press.According to Al Ray, the EU had frozen its decision to put marks on settlements products under the pressure of the United States, in 2013, but this move was restored again and approved by 13 European countries.

The report added that 16 foreign ministers of EU demanded in less than two months, to go forward with procedures to mark settlement products in European marketing networks.

The foreign ministers assured that the continued expansion of illegal settlements in the occupied Palestinian territories, and in other areas occupied by ‘Israel’ in 1967, threatens the chances of reaching a final and fair peace deal.

European diplomats said that ‘after the Israeli elections, and in the light of Prime Minister Benjamin Netanyahu’s latest statements against two-state solution, it was decided to renew the initiative of marking the Israeli products .’

The Belgian Foreign Minister, Dedea Rendr, is the initiator of the draft letter, according to the diplomats.

In 2014, Belgium published instructions obliging the marketing networks to mark the agricultural products of settlements in the occupied West Bank, the Golan Heights and East Jerusalem.

To be noted, German Foreign Minister Frank-Walter Steinmeier is the only one of the five major foreign ministers of European countries who did not sign the letter.