Ghannam: “Israel Falsifying Facts Regarding The Murder Of Ghanayem” 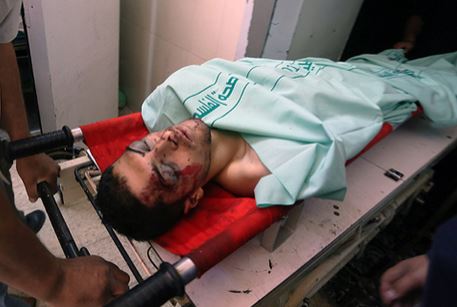 Ramallah Governor Leila Ghannam stated that the autopsy of the slain young Palestinian man, killed earlier Sunday near Ramallah, proved he was shot before the soldiers’ vehicle crashed on top of him, crushing his body.Ghannam said the Israeli narrative of events leading to the murder of Abdullah Eyad Ghanayem, 22, is a fabrication and distorting of what really happened.

Her statements came in a press conference in front of the Palestine Medical Center in Ramallah.

She stated that autopsy findings proved he was first shot, and then the soldiers drove towards him, before the army jeep flipped over him, crushing him to death.

The military jeep remained on top the body of the slain Palestinian for nearly three hours.

The Governor called on media outlets to investigate the facts on the ground, instead of taking the military allegations for granted.

“This occupation targets the Palestinians on a daily basis,’ she said, “It fabricates and falsifies facts to justify its ugly crimes against humanity.”

The Israeli army alleged its soldiers invaded the village to arrest some Palestinians, and “accidentally crushed the Palestinian after he threw a Molotov cocktail.” The army said it intends to ‘investigate the incident.’

Resident Abdullah al-Hajj told Reuters that the young man did not attack the army, and that he was walking to a chicken farm, where he worked.

One of the medics said as he, and his team, arrived at the scene, they found the body of the slain Palestinian crushed under the army jeep, with a gunshot wound in his loin area.