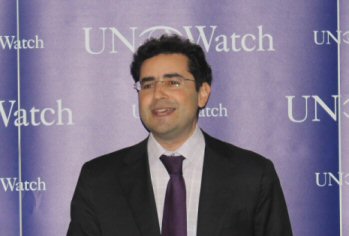 The so-called ‘UN Watch’, which pretends to be an independent organization, was revealed to be receiving frequent funds from the Israeli government.The NGO, which claims to be a briefing body for UN member states, is reportedly functioning as a forefront for the Israeli occupation to improve its distorted image due its many bloody aggressive wars in the Middle East.

A well-informed source revealed to Days of Palestine that the NGO received funds estimated at up to $700,000 for 2014-15 alone.

Established in 1993, the NGO, which was known as the Wednesday Watch, describes itself as a non-governmental organization whose mandate is to monitor the performance of the United Nations by the yardstick of its own charter. It calls itself a human rights promoter.

However, the content of its reports tell another thing. It only attempts to whitewash Israeli crimes and law violations.

The Genava source, described as credible and exclusive, added: “We have certain information that the NGO named ‘UN watch’ is reporting to the Israeli intelligence and coordinate directly with the Israeli foreign ministry to shield Israel at the United Nations platforms.”

The so-called independent NGO is mainly run by a young Canadian lawyer called Hillel Neuer, a very controversial figure, who was arrested in the US for carrying unlicensed weapons.

Well-known Israeli newspaper Maariv recently named Neuer to its list of the Top 100 Most Influential Jewish People in the World.

He holds an LL.M. in comparative constitutional law from the Israeli Jewish Hebrew University in occupied Jerusalem. He served as a law clerk for Justice Itzhak Zamir in the Israeli Supreme Court.

Neuer is reported to have met members of the Israeli intelligence community in Geneva, and to have coordinated different campaigns against Latin American countries, as well as China and some Arab states.