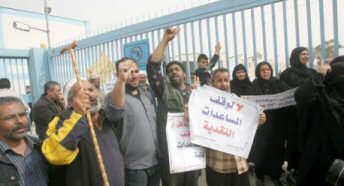 According to an official source, the United Nations Relief and Works Agency (UNRWA) is facing a financial crisis due to a widening gap between the needs of the agency and support from donor nations, reported US News.Jordanian Minister of State of Media Affairs Mohammad Momani said, at a UNRWA committee meeting, that a widening gap between demand and supply was the reason for what is being called the worst financial crises that has ever faced UNRWA in its 65 year history.

According to Shanghai Daily, Momani added that Jordan was ‘deeply concerned’ over the crisis, and reminded the committee that Jordan hosted the largest number of Palestinian refugees in the world.

UNRWA Commissioner-General Pierre Krähenbühl said: “This welcome donation comes at a crucial time for UNRWA as developments in the region dramatically increase the needs of our refugees, many of whom are caught up in the civil war in Syria and who are living under blockade and occupation in Gaza and the West Bank.”

He added that there were ‘unprecedented pressures’ on the agency’s resources, and thanked the Emir and people of Kuwait for the ‘timely’ donation.

However, PNN reports that, in remarks made separately, Krähenbühl said on Monday that the plight of the refugees represented a ‘time bomb’ in the region, and blamed the ‘political failure’ of the international community in neglecting the refugee problem for so long.

Hundreds of Palestinian refugees took to the streets of Beirut on Monday to protest recent cuts in aid from UNRWA, said PressTV.

Participants in the demonstration allegedly submitted a list of demands to John Marks (Deputy Director of UNRWA Affairs in Lebanon), and expressed their concern about the threat these cuts would pose to the education of Palestinian children, as well as the construction of new camps for refugees.