Adnan: ‘The more they torture me, the more determined I become’ 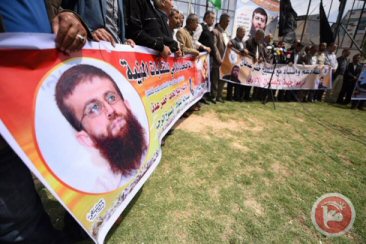 Palestinian prisoner Khader Adnan, who is now on his 42nd day on hunger strike against the Israeli practice of administrative detention, said Tuesday that ‘the more [the Israelis] torture me, the stronger and more determined I become.’Adnan, 37, made the comments to the chief lawyer of the Palestinian prisoner’s society Jawad Bulous, who was visiting him at Israel’s Assaf Harofeh medical center.

According to Ma’an, Bulous said that ‘new dangerous symptoms’ had appeared indicating that Adnan’s health has seriously deteriorated. ‘He suffers severe pains all over his body with blue spots on his shoulder and clear speaking problems.’

Bulous said that despite Adnan’s sufferings, there has so far been no discussion about his case, although he said officers from the Israeli prison service visited Adnan on Monday to see how dangerous his condition was.
‘Despite his complaints about detention conditions in hospital, wardens made these conditions worse by fixing a curtain at the outer door of his room and three wardens were sent to his room while his hand and his leg were tied to his bed,’ said Bulous.

Adnan also told the lawyer that a delegation representing the International Committee of the Red Cross had attempted to visit him several days ago, but that they cancelled the visit after Israeli officers insisted on attending and keeping Adnan tied to the bed.

On Friday, the director of the prisoner’s society, Rafat Hamduna, said that Adnan’s weight was dropping to dangerous levels and he was no longer able to stand up or move.

Adnan, a father of six children, was detained on July 8, 2014 and sentenced to administrative detention for the 10th time in his life.

Palestinians held in administrative detention can be held without charge or trial for months or years, and are denied access to the evidence that led to their detention.

In an open letter released last month, Adnan wrote that the goal of his strike is to resist Israel and prevent it from tarnishing the achievement of prisoners who secured their freedom by going on hunger strikes in the past, only to be rearrested by military forces.

In 2012, Adnan took part in a 66-day hunger strike against his detention without trial or charge. The agreement that released him on April 18 of that year also ended a hunger strike of 2,000 Palestinian prisoners, who had called for an end to administrative detention.

Despite Israel’s agreement to the demand at the time, around 500 Palestinians are currently being held under administrative detention, out of a total of nearly 6,000 Palestinians being held in Israeli prisons.