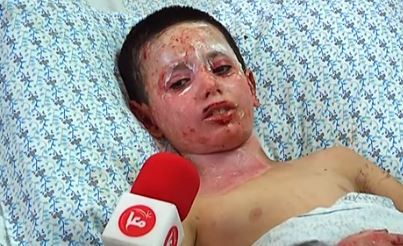 9-year old Qoteiba Sawafta suffered serious burns and injuries when he picked up an Israeli explosive object, thinking it was a toy, and it detonated in his face. The incident took place in Tubas, in the central part of the occupied West Bank. The Israeli military frequently conducts live fire training in the area. This report was broadcast in Arabic on the Maan News Agency’s television channel on June 15, 2015. It was translated into English by the IMEMC.

“I was playing; I found something…I thought it was a toy, but it exploded in my face… it just exploded.”

With these words Qoteiba Sawafta, nine years of age, described the moment when the Israeli explosive object detonated as he picked it up, thinking it was a toy, causing severe burns to his face and various parts of his body.

“It was an unbearable, horrific scene,” the mother said, “I collapsed, fell onto the ground… the scene was something I cannot ever describe…”

“All of his body looked charred, with what appeared to be like nails or shrapnel covering his face and other parts of his body,” she added, “At first I thought a cooking gas jar exploded near him or an electric malfunction… I never thought it was a bomb.”

When the Israeli soldiers aren’t operating in the occupied West Bank, their dropped explosive objects are always there. The army frequently conducts live fire training in Palestinian communities, leaving behind very dangerous ordnance.

Sawafta was planning to spend the summer holiday in a summer camp with his friends and schoolmates, but he is now hospitalized with severe burns, in the al-Makassed Hospital in occupied Jerusalem.

A doctor treating Sawafta told the Maan News Agency that the child was hospitalized on June 4th, suffering burns on 30-40% of his body.

The devastated family is hoping that their child would be the last victim of the Israeli explosive objects and materials left behind by the military after training in large areas, especially in the Jordan Valley, and the southern part of the occupied West Bank.

The father said the family lives in the Northern Mountain Area in the Tubas District; an area with large spaces and the houses are not close to each other.

“We can practically see the entire district from where we live, whenever the army wants to invade the area, they come from a minor road close to our home,” he added, “They usually gather there, and then invade the area, maybe they dropped the explosive then; I don’t know… the army does a lot of things. They drop explosives, plant explosives…”

Official studies revealed that at least 250 Palestinians have been killed by unexploded Israeli ordnance left by the army Israel occupied the West Bank in 1967, while hundreds have been injured; dozens of them suffered permanent disabilities.