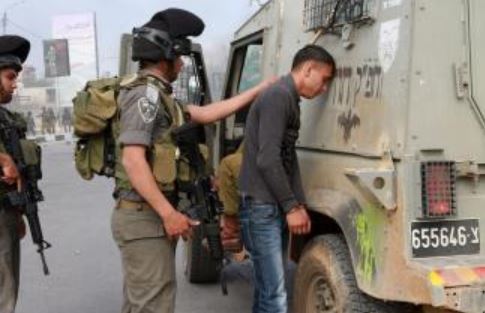 Israeli soldiers kidnapped, on Monday afternoon, a Palestinian in Beit Ummar town, north of the southern West Bank city of Hebron, and confiscated fruit and vegetable stands, on the main on the entrance of the town, near the Jerusalem-Hebron road.Mohammad Awad, spokesperson of the Popular Committee against the Wall and Settlements in Beit Ummar, said the soldiers stopped a Palestinian car and kidnapped its driver, Ahmad Mohammad Za’aqeeq, 28 years of age, after forcing him out of his vehicle along with his wife and their 5-month-old son.

Awad added that the soldiers held the three Palestinians for more than two hours, before kidnapping Za’aqeeq, and took him to the military tower, installed at the main entrance of the town, before moving him to an unknown destination.

In addition, soldiers attacked dozens of Palestinian farmers, and confiscated their fruit and vegetable stands, on the main entrance of Beit Ummar.