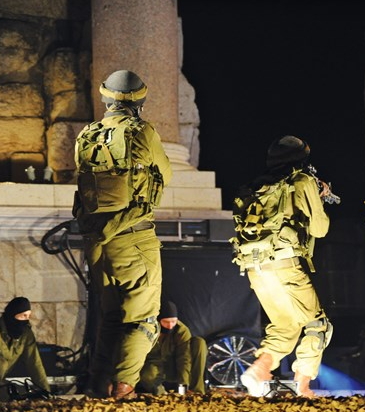 Israeli soldiers invaded, on Saturday evening, the al-Bireh city, in the central West Bank district of Ramallah, shot and injured a Palestinian child, during clashes with local youths, while one Palestinian was kidnapped in occupied Jerusalem.Palestinian medical sources said the child, 15 years of age, was shot with two live rounds in the leg, and was moved to the Palestine Medical Center. The incident took place in Jabal at-Tawil area.

In Jerusalem, the army kidnapped a young Palestinian man, and took him to an interrogation center in the city.

Soldiers said an Israeli man was injured, reportedly after Palestinian youths hurled stones on his car, in Bab al-‘Amoud area.

Israeli sources said the man was moved to the Hadassah Medical Center suffering a head injury.