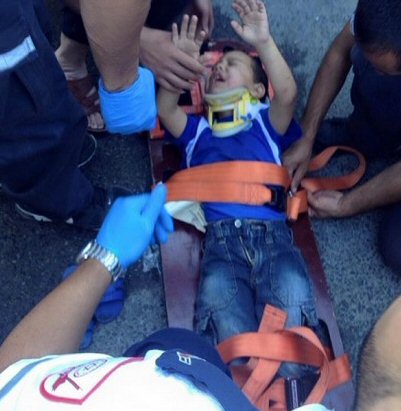 An extremist Israeli settler ran over 3-year old Palestinian child in occupied Jerusalem, Saturday.The child was identified as Yasser Shammas from Wadi al-Hilwa, in the village of Silwan, occupied city of Jerusalem.

Witnesses said, according to Days of Palestine, that the settler, who was driving a mini-car, approached the Palestinian child while he was waiting with his mother to cross the street.

Palestinian paramedics rushed to the scene and evacuated the child to Hadasa Hospital, in Silwan.

According to medical sources, the child sustained light injures, but bruises are spread all over his body. The child is still under continuous observation, medical sources added.