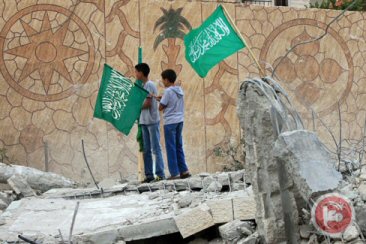 Hamas’ military wing, Izz al-Din al-Qassam Brigades, reportedly claimed responsibility for Friday’s West Bank shooting that left an Israeli man dead and another lightly injured.“One of the fighters ambushed a settler vehicle and shot at them from point-blank range after having observed the area continuously,” a statement released by the group said Friday, according to Hamas-affiliated news site the Palestinian Information Center.

The group added, according to Ma’an News Agency, that the attack “was part of an ongoing series of operations which started months ago in retaliation to occupation crimes,’ naming several Palestinian “martyrs” who have recently been killed by Israeli forces including Izz Addin Abu Gharra from Jenin and Abdullah Ghanayim Gneimat from Kafr Malik near Ramallah.

The two were killed by Israeli forces Sept. 23, 2014 on suspicion that they were behind the killing of three Israeli teenagers near Hebron in June the same year.

Marwan Qawasmeh was a member of the Qawasmeh tribe of the Hebron area. The name has historically been identified by Israeli authorities as being closely aligned with Hamas, and has gained a reputation for spoiling Palestinian ceasefire efforts, including those of Hamas.

“Resistance will continue despite the war waged against it, and will choose the appropriate time and place to strike,’ the military wing’s statement continued.

‘This operation isn’t the first and won’t be the last.’

An Israeli army spokesperson confirmed Friday that a Palestinian approached a vehicle near the illegal settlement of Dolev near Ramallah and shot the two Israelis from close range.

The suspect has not yet been identified.

UN Envoy to the Middle East Nickolay Mladenov condemned the attack Saturday and urged calm in the region.

‘On this second day of Ramadan and at the start of the Shabbat, I call on all sides to exercise the utmost restraint, to maintain calm and promptly bring the perpetrators to justice,’ Mladenov said in a statement.
Local media named the dead civilian as Danny Gonen, a 25-year-old from the central Israeli city of Lod. Despite early reports that the two were settlers, Israeli spokesman Peter Lerner said that Gonen and his friend, also from Lod, had been hiking in the area.

Israelis have been attacked previously near illegal settlements in the West Bank as well as in occupied East Jerusalem, with an average of two Israeli civilians per week sustaining injuries by Palestinians so far in 2015, with two Israelis killed, according to the UN Office for the Coordination of Humanitarian Affairs.

In the same time period, an average of 39 Palestinians have been injured by Israeli forces per week and 13 killed, two of whom were killed since the beginning of this month.