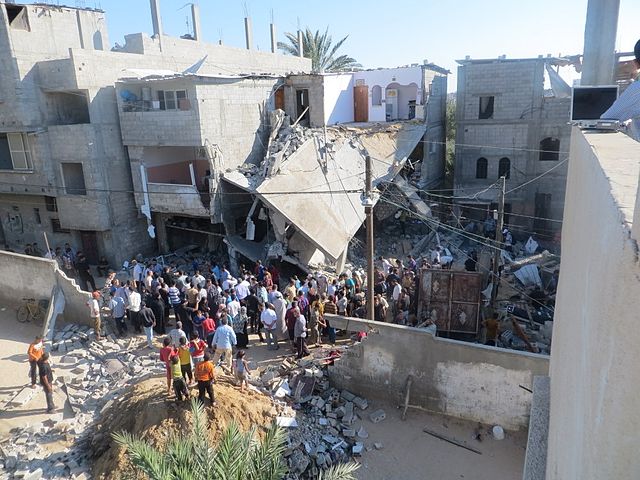 A long-anticipated United Nations Report on the 51-day Israeli invasion of Gaza in the summer of 2014 was released on Monday. The report faulted the Israeli military with deliberately targeting civilians and civilian infrastructure, which resulted in “unprecedented devastation” and the deaths of 2,251 Palestinians.The report notes that during the 51-day Israeli invasion, 6,000 airstrikes and approximately 50,000 tank and artillery shells were fired by Israel into Gaza, killing 1,462 Palestinian civilians, one third of them children. The report estimates that 65% of the Palestinians killed by Israeli forces were civilians.

In addition, the report placed the blame for the civilian deaths squarely on the Israeli government, which had knowledge of the increasing toll of their invasion on civilians, but chose not to change course in any way and continued with the practice of massive bombardment on civilian areas.

For that reason, the report raises questions about potential violations of international humanitarian law by these officials, which may amount to war crimes

Israeli authorities refused to cooperate with the UN investigation, which was led by a former justice of the Supreme Court of the State of New York, Mary McGowan Davis.

The Israeli government issued its own report last week, in an attempt to preempt the expected UN Report, placing the blame for civilian deaths on the Hamas party in Gaza. The Israeli government’s report claimed, without evidence, that Palestinian fighters used civilians as human shields.

The only evidence of the use of human shields uncovered during the investigation, however, found that Israeli forces used Palestinian civilians as human shields.

The report, which based its findings on investigations on the ground, interviews with witnesses, and examination of physical evidence, found that Israeli forces conducted numerous airstrikes on homes that resulted in the deaths of entire families. The commission also criticized Israel’s decision to “level entire neighborhoods” and the use of the so-called “Hannibal directive”, which called for indiscriminate attacks when a soldier was believed to have been captured, resulting in the death of the soldier as well as numerous Palestinian fighters and civilians.

The report was also critical of the indiscriminate nature of Palestinian fighters’ homemade shells, which were fired blindly across the border with Israel because they contain no aiming mechanism.