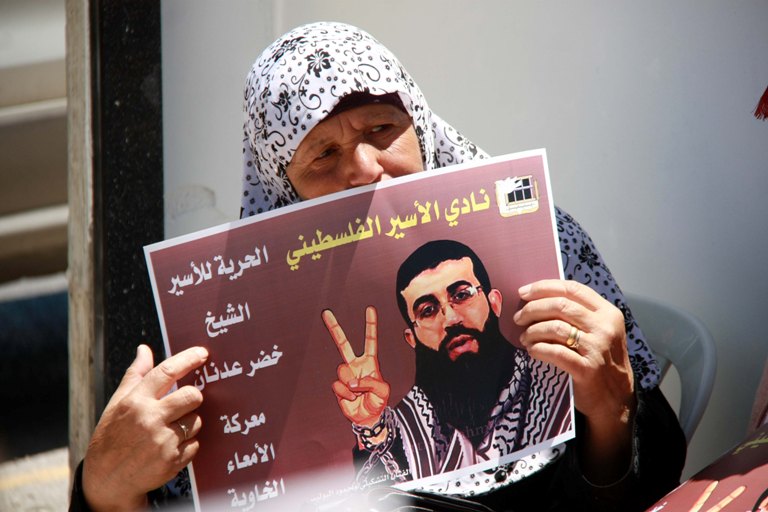 The Palestinian Prisoners Society (PPS) has reported, Monday, that detainee Khader Adnan continues his hunger strike for 49th consecutive days amidst a serious deterioration in his health condition, in the Assaf HaRofeh Israeli Medical Center.The PPS said the Adnan suffered a very serious health deterioration, and is facing a grave risk of losing his life.

PPS lawyer Jawad Boulos visited the detainee, on Monday morning, and was informed that Adnan developed two new complications; very visible yellowness in his eyes, which is typically an indication of a dysfunction of the liver, in addition to a much darker urine which could indicate a serious issue or dysfunction of the kidneys.

Boulos was informed that those conditions could witness further deterioration, and become irreversible.

The lawyer confirmed that Adnan is aware of the dangers, but insists on continuing his hunger strike without conducting any medical checkups. The detainee is only drinking water.

Adnan was kidnapped on July 8, 2014, and has since been held under Administrative Detention orders without charges or trial. He went on hunger strike for a week in January of this year after Israel renewed his administrative detention orders for the third consecutive time.

The strike comes in protest of this administrative detention, under which detainees are held indefinitely without charge or trial, as Israel has detained thousands of Palestinians over the years, by this procedure and for periods ranging from several months to several years.

The highest number of administrative detainees was during the first Intifada in 1989, when the number reached 2,000 prisoners.

Two years ago, Adnan held a 66-day hunger strike, also protesting his administrative detention, and only ended his strike after Israel agreed to release him in 2012.