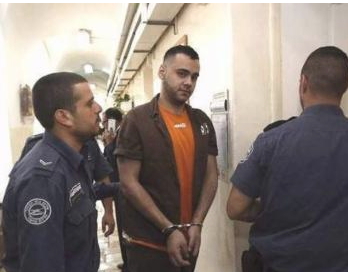 The Israeli District Court in occupied Jerusalem sentenced, on Monday morning, a young Palestinian man to 13 months of imprisonment, with an additional four months suspended, for what the court called “incitement,” on his Facebook page.Mohammad Mahmoud, a lawyer with the Ad-Dameer Prisoners’ Support and Human Rights Association, said Odai Mofeed Bayyoumi, 23 years of age, was taken prisoner on December 16, 2014.

Mahmoud said the court sentenced Bayyoumi to 13 months, and added four months suspended, “because he is a former political prisoner.”

Bayyoumi, from Kafr ‘Aqeb neighborhood, in Jerusalem, was transferred to different detention centers since his abduction.

On Tuesday, May 19, an Israeli court sentenced a Palestinian man to eight months of imprisonment, with an additional six months suspended, for activity on social media.

The Jerusalem detainees’ families committee said that the Israeli magistrate’s court had handed the sentence to Sami Jamal Faraj Ideis, 28, from Shu’fat after he was convicted of inciting anti-Jewish violence and supporting ‘terror’ in posts and comments on Facebook. http://www.imemc.org/article/71647