Palestinian Kidnapped, Many Injured, In Jerusalem 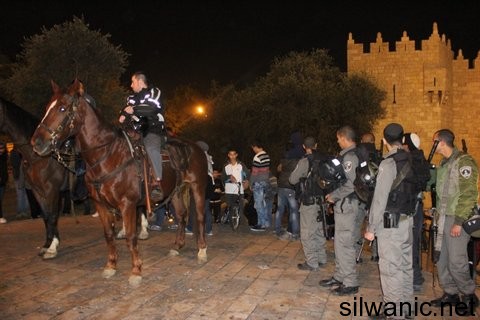 Israeli soldiers kidnapped, on Sunday evening, one Palestinian and wounded several others, during clashes in Bab al-‘Amoud area, in occupied East Jerusalem. Clashes also took place Silwan town, south of the Al-Aqsa Mosque, and the Shu’fat refugee camp.The Wadi Hilweh Information Center in Silwan (Silwanic), in Jerusalem, said the army kidnapped a young man, while many residents suffered cuts and bruises, after being attacked by the soldiers.

It added that the clashes took place as Israeli extremists marched in Bab al-‘Amoud, protesting the stabbing of an Israeli soldier, earlier on Sunday, and chanting slogans against the Palestinians.

On Sunday evening, soldiers attacked a group of young Palestinians, walking in Bab al-Amoud area, and fired concussion grenades at them, leading to clashes.

The soldiers also fired rubber-coated metal bullets, and sprayed the Palestinians with waste-water mixed with chemicals.

Medical sources said four Palestinians were injured, including a young man who was shot in the left eye, and was moved to a local hospital suffering a moderate injury.

Three Palestinians were also injured by shrapnel of concussion grenades, one of them, identified as Mohammad Salah, suffered an injury in his back.

Clashes also took place in the al-‘Isawiyya town, Ras al-‘Amoud neighborhood, and the Central Neighborhood in Silwan, while the police installed roadblocks in different parts, and main roads, in Silwan.