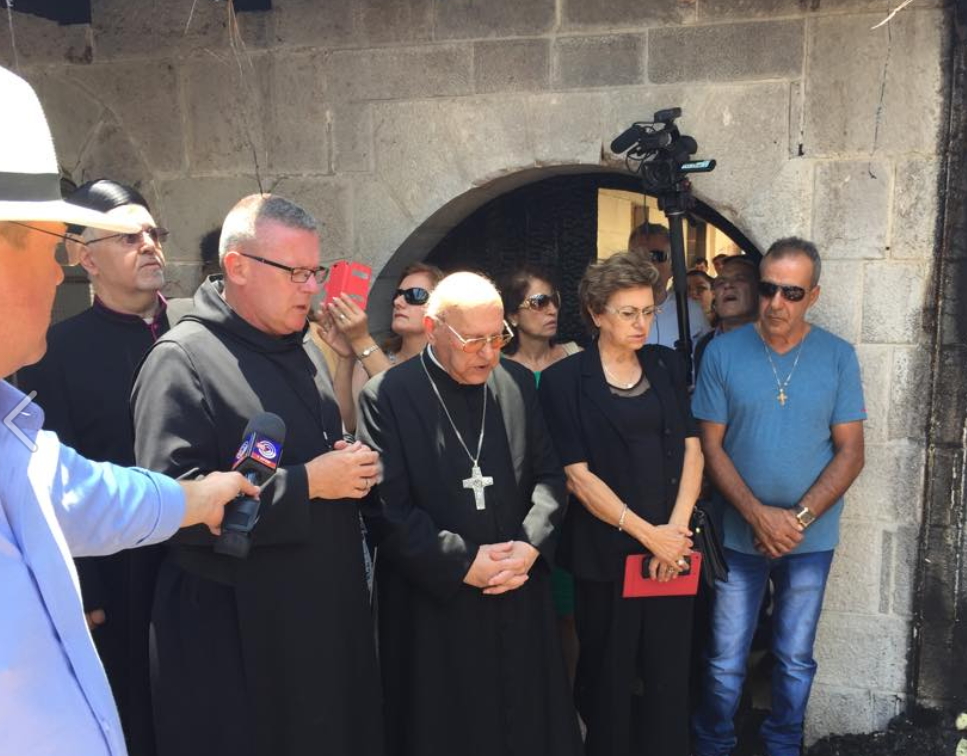 Following condemnations by other Christian organizations, the Assembly of Catholic Ordinaries issued a statement condemning the church burning by right-wing Jewish extremists on Thursday night. Father Michel Sabbah, Father Amjad Sabbara, and Dr. Hanan Ashrawi also strongly denounced the assault.
According to the statement from the Catholic officials, the arson is “is another act of violence perpetrated by intolerant and scrupulous individuals that damage the image of the Holy Land, offends Christians in this country and the Church as a whole, and distresses the idea of a State that defines itself as democratic, tolerant and secure.”

The assembly pointed out that such acts of extremism undermine the coexistence that is so necessary for peace in the Holy Land. They called on Jews, Christians and Muslims to come together to fight such manifestations of violence, and to teach young people the importance of tolerance and coexistence.

In their statement, the Assembly of Catholic Ordinaries said:

“This is the third time that the Benedictine community of the Holy Land has been affected by similar criminal attacks. On April 27, 2014 at the same site in Tabgha, young extremist Jews desecrated crosses and an altar. In the Benedictine Dormition Abbey on Mount Zion close to the Upper Room, fire was started on May 26, 2014 a few minutes after the departure of Pope Francis. The Benedictines of Mount Zion are also incessantly subjected to acts of contempt and violence.”

The Israeli authorities, according to the Catholic Assembly, never seriously investigated those incidents.

They called on the Israeli government to conduct a thorough and serious investigation of this most recent act of violence against a Christian holy site, and not just some statements of condemnation.

Israeli authorities arrested around 15 Israeli extremists for questioning, but released them all the same day.

Franciscan Pastor of Nazareth Amjad Sabbara, and various religious and social groups, strongly denounced the attack on this important historic Christian Church, which is one of the most sacred Christian places in the entire world.

“This attack violates every foundation of culture and humanity; it is an insult to us as Christians, and an insult to every person of faith,” the statement reads, “It is a serious violation to every country’s commitment to protect holy sites. We are committed to the teachings of Jesus Christ; we follow his path no matter what.”

“We strongly condemn this shameful act, and are hoping the this type of racism will be uprooted, and we demand the Police and the security forces to perform their duties and protect all holy sites,” the statement adds, “Any person who allows himself to commit such a vicious crime must be punished to the fullest extent of the law.”

Father Emeritus Michel Sabbah said: ‘The attack is a repetition of what happened to the same church three or four years ago, but no one was punished because the police claimed they were underage, and gave other justifications, that resulted in no legal action against them.’

“But those responsible are not minors,” he added, “When I keep seeing this happening, I see a government in Israel, and I see leaders who are not doing their job.”

“We as Christians believe in the message of Christ, the message of love, no matter what happens, here we stay; we aren’t demanding the protection of anybody, here or abroad,” he said, “The state (Israel) must know its duties, and must perform them. It shouldn’t just make statements; it knows the criminals, not minors, but those who raise them, in schools and in religious, and political, circles.”

“We don’t want to meet governmental officials, meeting them doesn’t honor us,” Father Sabbah added, “Every official, president or leader, must know their duties and must perform them, without meeting with me, or any other religious leader.”

Dr. Hanan Ashrawi, member of the Executive Committee of the Palestine Liberation Organization (PLO), said there is a significant increase of organized hate crimes carried out by Jewish fanatics against both Christian and Islamic holy sites in Palestine.

She added that such attacks are taking place under the protection, and direction, of the fanatic Israeli government, that has failed to seriously investigate dozens of assaults against holy sites in occupied Palestine.

“This is an outcome of racist ideologies, constant incitement, and the discriminatory laws of Israel,” Dr. Ashrawi said, “This is yet another example how Israel acts with impunity, without fearing any legal prosecution.”

The Palestinian official also said that the fanatic right-wing coalition of the Israeli government, and various religious and political organizations in Israel, are encouraging a racist type of ideology in Israel, and among the settlers, who are illegally living in occupied Palestine.