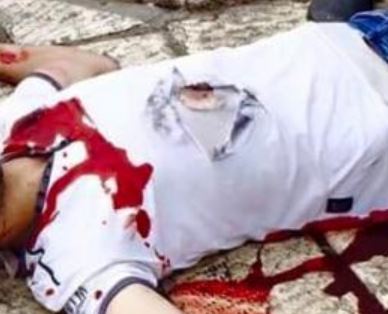 Israeli medical and military sources have reported, Sunday, that a young Palestinian reportedly stabbed an Israeli soldier, at the Damascus Gate in Jerusalem, causing a serious injury. Soldiers repeatedly shot the Palestinian, causing severe injuries.The Israeli Police initially said the Palestinian succumbed to his wounds, but later corrected its report, and stated he was in a serious condition in the Hadassah Ein Karem Medical Center, in Jerusalem.

Israeli daily, Haaretz, said the young Palestinian, 18 years of age from the West Bank, stabbed a soldier in the neck, causing a serious injury.

The soldier, 20 years of age, suffered wounds to his chest and neck, and was transferred to the Shaare Zedek Medical Center, in Jerusalem.

According to Maan News, lawyer of the Ad-Dameer Prisoners’ Support and Human Rights Association, said the wounded Palestinian, Yasser Yassin Tarwa, 18, from Sa’ir town, east of the southern West Bank city of Hebron, is believed to be clinically dead.

An Eyewitness told the Palestine TV that he saw the young Palestinian talking to Israeli soldiers, and apparently an argument took place before the Palestinian pushed, or attacked, a soldier before another soldier fired four to six rounds of live ammunition at him.

The Israeli Police issued a gag order of the case until it concludes all investigations and publishes it report.

According to the witness, the young Palestinian was left bleeding, without any help for 10-15 minutes, before the medics tried to help him.

He was bleeding from his chest, arm, and his loin area, the eyewitness added.

Israeli Ynet News said the stabber managed to enter Jerusalem illegally, had no prior security records, and that he was not among the Palestinians who were granted permits to enter the city during the holy Muslim month of Ramadan.

Head of the “Israel Our Home Party” Avigdor Lieberman held the Palestinian Authority responsible for the attack, and slammed the Israeli government of Prime Minister Benjamin Netanyahu.

He said the attack is a result of what he called “ongoing incitement by the Palestinian Authority,” and the “weak Netanyahu government.”

Lieberman also called for “aggressive measures against Hamas,” in the Gaza Strip, and the West Bank.