Army Fires A Missile Into An Agricultural Land In Northern Gaza 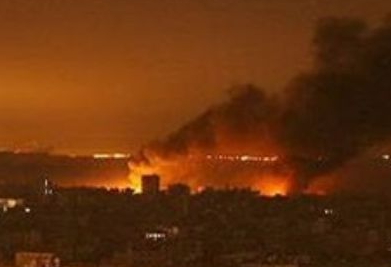 The Israeli Air Forced fired, on Wednesday at dawn, a missile into a Palestinian agricultural land, in Beit Hanoun, in the northern part of the Gaza Strip, causing fires. Army claimed it was retaliating to a shell fired from Gaza.Eyewitnesses said the attack did not cause any casualties, but consumed a large agricultural area, and that the Israeli Air Force was still flying over different parts in the besieged coastal region.

On Tuesday evening, the Israeli army claimed one shell was fired from Gaza, into an open area in Hof Ashkelon, causing no injuries or damage, and said it conducted a search campaign, allegedly looking for unexploded ordnance.

Israel held Hamas responsible for the escalation, and said that “although the people behind the recent incidents of rocket fire are not affiliated with Hamas, and affiliate themselves with Al-Qaeda, the movement is to be held liable.”

Head of the Hof Ashkelon Regional Council of settlements, Yair Farjun, said ‘the conflict between Hamas and al-Qaeda affiliated groups, is not of interest to the Israelis,’ but warned “Israel will not tolerate any fire from Gaza.”

He also said that Tel Aviv would not even accept “a flotilla,” referring to solidarity ships that challenge the Israeli siege on the coastal region, to deliver medical and humanitarian supplies.

The Israeli official was referring to statements made by Arab Member of Knesset Basel Ghattas, member of the Joint Arab List, who told Israeli Ynet News, Sunday, that he intends to join the flotilla heading from Greece to Gaza, to deliver humanitarian supplies.