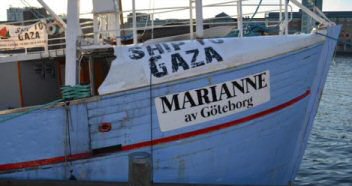 One of the organizers of Freedom Flotilla III trip, Dror Feiler, said on Wednesday that Marianne of Gothenburg is about to set off to Gaza within hours. In response, the Israeli Foreign Ministry warned that it will prevent the boat from reaching its destination and break the siege.Israeli Foreign Ministry spokesman, Emmanuel Nachshon, said that the ministry is following the third flotilla updates through the media, according to the PNN.

“They announced their intention to go to Gaza, but we will not allow this because Gaza is under a naval blockade approved by international law,” said Nachshon.

“If the so-called helpful Gaza flotillas were really interested in the welfare of the population in Gaza, they would send their aid via Israel,” he added, pointing out that Israel “will not allow their access to Gaza.”

Feiler, on the other hand, said that the trip organizers will work on getting international arrest orders against Israeli soldiers if they attempt to stop the boat.

For its part, the Palestinian NGO network said the Israeli occupation will be responsible for the lives of the activists on board. The network also denounced Israeli threats to the peaceful activists who are trying to reach Gaza, in solidarity with some 1.8 million people.

The network confirmed that all international bodies, headed by the United Nations, must immediately move to protect the boat and prevent any harm that could be done to it by Israeli forces.