Gaza: The Drone Eats With Me — Diaries From a City Under Fire 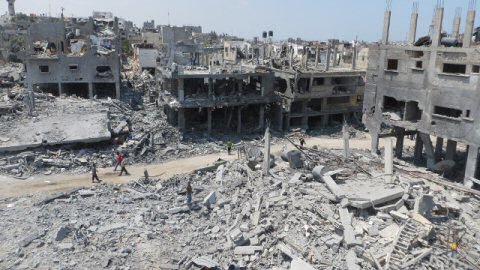 “We prepare the suhoor. We all sit around five dishes: white cheese, hummus, orange jam, yellow cheese, and olives. Darkness eats with us. Fear and anxiety eat with us. The unknown eats with us. The F16 eats with us. The drone, and its operator somewhere out in Israel, eat with us.”I read The Drone Eats With me: Diaries from a City Under Fire by Atef Abu Saif in almost one sitting – resenting that I had to break to cook and eat dinner. These beautifully written searing diaries recounting each of the horrific 51 days of Israel’s monstrous war on the people of Gaza sweeps the reader into Atef’s anguished experience. An experience so dreadfully encompassing of the dark depths of human sentience that it is simultaneously personal and collective.

“Your personal concerns start to erode; even your gravest fears begin to seem unjustified. What does it matter if you’re afraid for your children when all the children in the Strip are in immediate danger? What does it matter if you’re worried that your house may be reduced to rubble when thousands are being destroyed up and down the Strip? Is your house any better than these countless others? Are your children any better than the hundreds who have been killed or maimed already?”

Atef shares with us the mental and emotional torment of every Palestinian parent, child, husband, wife, sibling, friend trapped in Gaza, as Chomsky puts it in the foreword, “under remorseless, relentless assault by the most advanced technology of killing and destruction that the ingenuity of modern civilization has devised”.

The horror that to the outsider was unimaginable, becomes from the first to the last words, felt, real, and confronting. We are challenged to go way, way beyond the statistics and images of news-bites….

…to the core truth of Palestinian suffering and the infernal Israeli cruelty that inhumanly inflicts it …..

The Kawareh family – from Khan Younis, whom the drone decided to prevent from enjoying a meal on the roof of their small building under the moonlight – they were not just ‘SIX’. They were six infinitely rich, infinitely unknowable stories that came to a stop when a dumb missile fell from a drone and tore their bodies apart. Six novels that Mahfouz, Dickens or Márquez could not have written satisfactorily. Novels that would have needed a miracle, a genius, to find the structure and poetry they deserved.

Israel systematically inflicts it on 1.7 million innocents with no place to escape in “a prison, one called Gaza” behind the bars of an illegal siege now in its eighth year.

We stand with Atef at the window of his home in al-Saftawi watching the deadly flashing of drones, the flames and ‘Gobs of red fire [that] can be seen spitting out of the warships”. We feel the house shake, feel all of Gaza shake under incessant explosions. We listen to “The constant pounding of the warships…. boom, boom, boom… are hollow sounds, mocking the thud of your heart”, to the “sobbing and screaming of children”, to F16’s sonic thunder and “the symphony of explosions, the roar of mortars, the whir of drones.” We negotiate with him the split second danger from the vigilant drone on his walk home from Jabalia where his family has taken overcrowded refuge. We wait in queues for food, put body parts in plastic bags and are engulfed by the dire agony of parents:

“The voice of a man from the Abu Namous family cries out; a reporter explains that the head he is carrying is that of his son, the brain is outside the head… The father cries out, begging his boy to wake up to see some toy he has bought him. Poor boy. Poor father.”

“The father of one of the children killed in an attack on the Shuja’iyya quarter wails at the corpse of his son: ‘Forgive me, son, I could not protect you!’ ”

“Looking at my children and thinking they could be dead in a moment’s time, that they could be transformed into one of those images on the TV – it’s too much.”

Abu Saif, 37 ex-prisoner, author, lecturer, playwright, columnist with his wife Hanna are parents of 5 children: “Talal, Mostafa, Naeem, Yasser. As my youngest, Jaffa, is only 19 months old….. This will be the third war my children have witnessed in five years.”

The harrowing fate, devised by Israel, of Atef’s children and of generations of Gaza’s young innocents, “There’s one [war] planted firmly in your childhood, one or two more in your adolescence, and so on… they toll the passing of time as you grow older like rings in a tree trunk”, indicts Israel and its allies- the indifferent silent spectators of Gaza’s suffering.

Those rings are the scars of war repeatedly torn open by the force of trauma; “Hearing a bomb in real life, for the first time in a couple of years, is like having a PTSD flashback. It jolts you to exactly where you were two years ago, five years ago, four decades ago, to the most recent, or very first time you heard one.”

The nuclear tension of time in the diaries is in our knowing what Atef doesn’t know as his narration unfolds day by day – that the Palestinians are doomed to 51 days of horror, “Everything becomes normal. The barbarity of it, the terror, the danger. It all becomes positively ordinary. The only real worry you have, after so many weeks, is a nagging feeling that this war is never going to end.” And we know there will be no easing of the torment for the children especially.

“Whenever you hear the screams of children or think about their fear, the terror that can overwhelm them, the questions in their eyes, the quiver of their lips, the panic in their faces. Whenever you hear the things they say in the heat of confusion, their attempts to understand what’s going on.”

One boy is still hysterical after seeing the flesh of his father and his uncle, mixed together like meat in a butcher’s shop. They have yet to calm him down.

And then there is the sorrowful litany, that punctuates the diaries, of massacred families and of children of whom the Bakir boys playing football on the beach are merely 4 of 527 dead: “A series of missiles from a warship miles out to sea tore their game to shreds. Their blood mixed with the sand and the sea water, while their bodies were retrieved amid screams and continued shelling.”

The diaries are a minute by minute collation of Israeli primeval war crimes and crimes against humanity in, what Hearst rightly labels Operation Stone Age – “The casualty rate grows steadily every day. More people are killed by single strikes in groups; in fives, sevens, nines. Individuals aren’t the targets, but residences, family houses. They’re bombed until there’s nothing left.”

Atef’s experiences confirm the test imonies by Israeli soldiers’ in the recent This is How We Fought in Gaza 2014 collected and released by Breaking the Silence and juxtapose the predictable hasbaric report that absolved Israel of war crimes. One hopes that there will be further published diaries by Palestinians at the front lines of humanitarian relief like Atef’s friend Hisham, Red Crescent workers and medical staff.

There was a conspicuous omission in Atef’s diaries; I expected with every turn of the page, among the detailed items of news, reference to Gaza’s resistance fighters. apart from a grudging entry about the 7th August, “Five military personnel have been killed in accidents during the day and are being carried to the graveyard, to their final rest. The gunshot was for their passing.”

The integrity of the diaries would have been strengthened by a generous acknowledgement of the courage of the freedom fighters; the thousands of young ‘sons of Palestine’ and their 531 comrades who were martyred while holding their ‘ground, costing Israel serious military losses, and igniting worldwide sympathy and respect’ for defending Gaza.

On his return home from Gaza, Norwegian surgeon, Mads Gilbert made a dignified speech lauding the Palestinian ‘unbending determination not to submit to the occupation!’. By comparing Gaza to Norwegian resistance to the Nazis, Gilbert upheld the Palestinian ’ right to resist, even with weapons.’

Even, top senior israeli intelligence official admitted that Israel underestimated the tenacity of Gaza fighters. A tenacity that boosted Palestinian morale and according to Samah Sabawi, gave Hamas its ‘biggest and most significant gain … an increase in popular support and admiration from Palestinians across the political and factional divide, as it became the epicentre of Palestinian resistance.” as well as a valid claim to victory. This victory was affirmed by Hanin Zoabi and Marwan Barghouti as well as a poll by Ramallah-based Palestinian Centre for Policy and Survey Research’s which found 79% believed Hamas had won the war.

Atef’s diaries are an essential must read that sheds light on the phenomenal heroic resilience of all Palestinians in Gaza’s hell. Ultimately, on behalf of Gaza, Atef throws down a moral gauntlet.

Who will convince this generation of Israelis that what they’ve done last summer is a crime? ….Who will convince the international community that it has a responsibility to be objective when things like this happen? No one, I suspect. Gaza has no one to help it. The people have only hope and their own resilience to fall back on.

We, all of us, have the means to convince Israel and the international community that Palestinians “have a right to live in peace” through Boycott Divestment and Sanctions, (BDS) which now has the legal and obligatory force of the Arms Trade Treaty (ATT) signed by 130 nations.

Through BDS, we can pressure our governments to strike off Israel’s killing and maiming power as the ATT, on 24 December 2014, became binding in international law requiring states to end the transfer of arms that would be used in war crimes and genocide.

Dr. Vacy Vlazna is Coordinator of Justice for Palestine Matters. She was Human Rights Advisor to the GAM team in the second round of the Acheh peace talks, Helsinki, February 2005 then withdrew on principle. Vacy was coordinator of the East Timor Justice Lobby as well as serving in East Timor with UNAMET and UNTAET from 1999-2001.