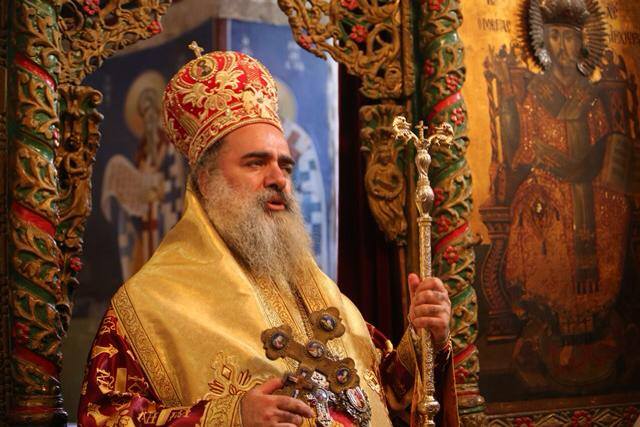 Israeli soldiers kidnapped, Saturday, Archbishop of Sebastia of the Greek Orthodox Church of occupied Jerusalem, Theodosius Attallah Hanna, and held him for several hours in the Etzion military and security base, north of Hebron, in the southern part of the occupied West Bank.Father Hanna was participating in a nonviolent protest against the illegal takeover of Beit Al-Bakara old Church, north of Hebron.

Coordinator of the National Committee against the Wall and Settlements, Hasan Breijiyya, said the soldiers attacked the nonviolent protesters against the illegal Israeli seizure, and the subsequent sale of the Beit al-Baraka hospital, part of the al-Bakara church.

He added that the peaceful protest against this illegal seizure of the Beit al-Baraka comes to expose the illegal Israeli policies, and outrageous violations against holy sites and property.

Scores of residents, Israeli and international peace activists, in addition to a delegation of the Presbyterian Church, participated in the procession, before the soldiers assaulted them.

The senior Christian figure was held for several hours in the Gush Etzion military and security base, before the soldiers eventually released him.

Prior to his release, Archbishop Hanna was handed an order for interrogation by the Israeli security services.

The soldiers completely surrounded the compound, and blockaded all nearby roads, eventually preventing the protestors from reaching the compound.

Pastor Danny Awad of the Presbyterian Church also delivered a speech explaining the role Beit al-Baraka played in helping patients through its free services to the public.

Israeli peace activists of “Combatants For Peace” said that the illegal Israeli policies must be exposed and condemned by all religious groups around the world, and called for more public support to counter the escalating Israeli violations.

The importance of the new settlement is that it paves the way for further settlement expansion, especially since there are more than 500 Dunams (around 125 acres) of Palestinian lands illegally confiscated by Israel in 2005, used to expand kibbutz Magdalen Oz.