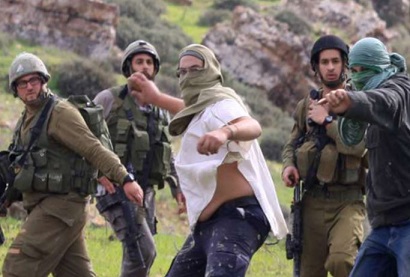 A number of Israeli settlers attacked, late at night, a number of Palestinian cars driving near the Bet El illegal settlement, east of the central West Bank city of Ramallah, causing damage but no injuries.Eyewitnesses said the settlers hurled stones at Palestinian cars, driving on the Ramallah-Nablus road.

They added that Israeli soldiers arrived at the scene, and clashed with scores of Palestinian youths, near the al-Jalazoun refugee camp, before the army fired rounds of live ammunition, rubber-coated metal bullets and gas bombs.

On Monday, soldiers detained a mentally challenged Palestinian at the al-Jalama roadblock, northeast of the northern West Bank city of Jenin.

Local sources said the Palestinian, from the Sa’adi family, was using fireworks near the roadblock, and that the soldiers interrogated him for several hours, before releasing him.